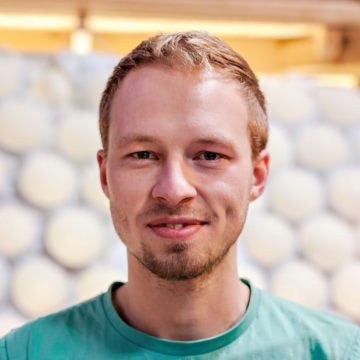 Parallel to studying the bachelors of Architecture at the TU Delft, Govert Flint was active as a self taught artist. He combined architectural principals with cinematography by configuring painted portraits in a spatial manner (self-named visual art concept: ‘Interactionism’). After graduating in 2011, Govert worked as a jr. architect in Shanghai, China. In 2012 he started the master Contextual Design at the Design Academy Eindhoven and graduated with his thesis: ‘Creatures With Creations & Their Segregation Of Joy’, mainly known for the Bionic Chair – which is an exoskeleton chair that allows the user to control a computer through body movements. In 2014 he joined the Eindhoven-based design collective Collaboration-O and started his own studio ‘Institute for Applied Motions’. The studio focusses on making emotional release and body movements functional through the use of objects and space.