Visual artist Heleen Blanken explores the complex relationship between people, nature and technology. Her work suggests that humans are not spectators of nature, rather we’re part of it. In order for us to ensure a liveable existence for the (non)humans who come after us, we must work together. 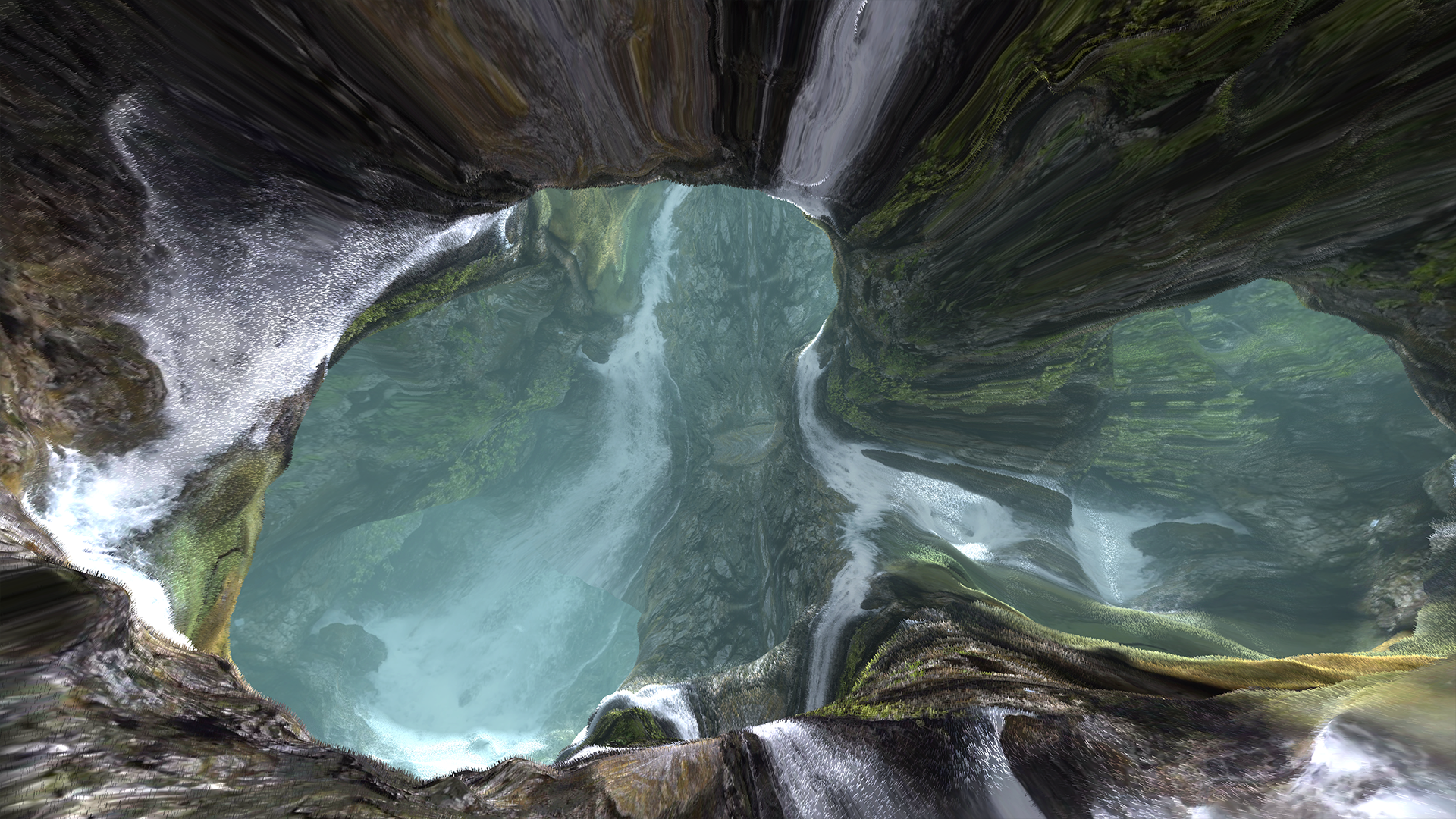 How do you define yourself?

I am using the tool of creating art to investigate multiple theories that might shine light on questions I have. Through those means I share my discoveries in those subjects. Art should give examples for a wider perception, not dictate what is right or wrong, true or false. It should open up discussions that simultaneously broaden perspective and question your own beliefs on the matter. I feel comfortable in that role.

Art should give examples for a wider perception, not dictate what is right or wrong, true or false 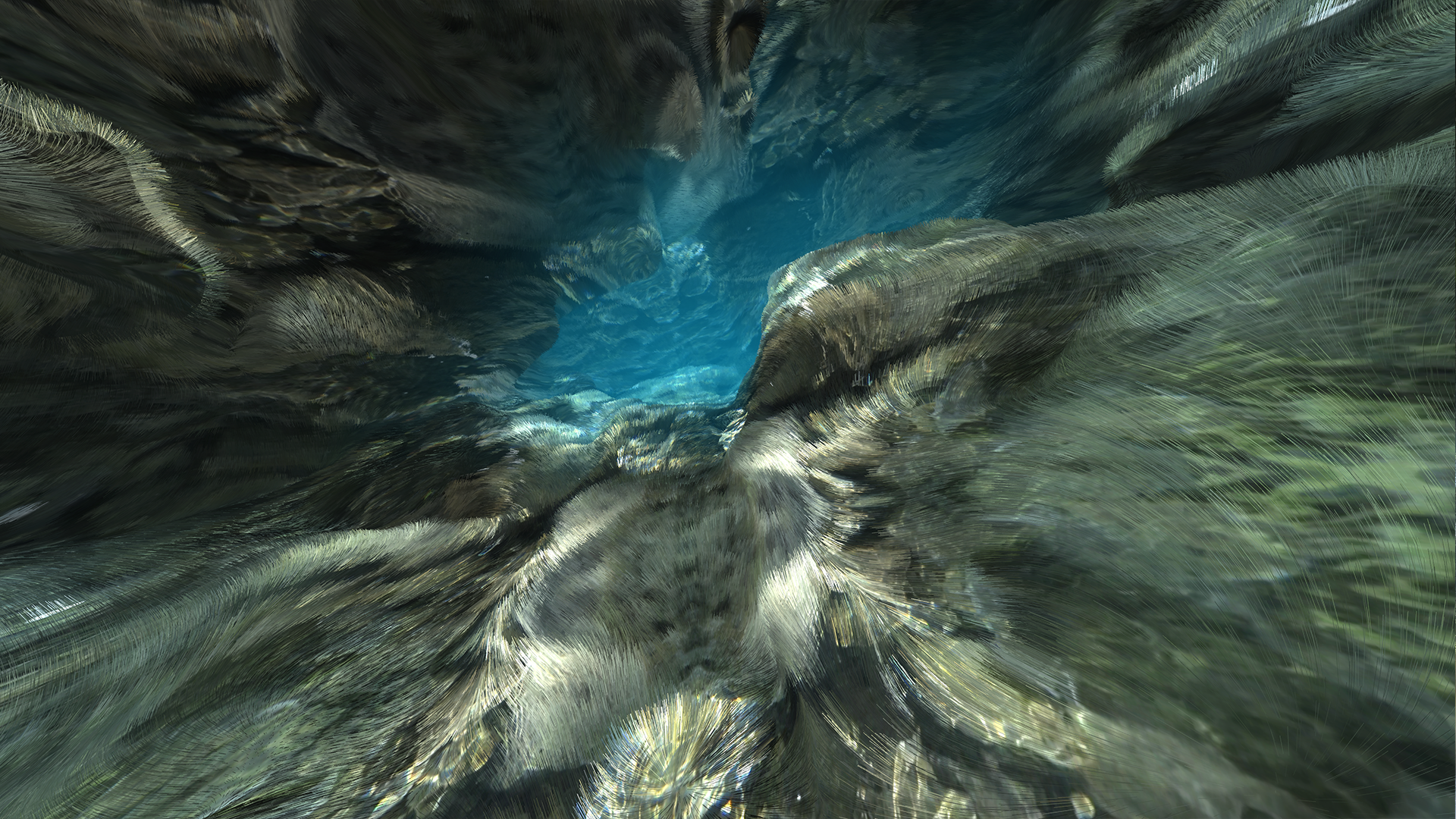 Your work draws from nature and its natural processes. Where does this interest come from?

I think it is the need to investigate my own role in the natural world, and what the natural world actually is. That we might have difficulties to deal with the wilderness because we question if we are part of it. I find myself thinking about nature as something out of reach, that we lost our connection with it. It feels unnatural. But thinking of going back to nature in this old form, like hunter gatherers appears also as a form of escapism. I question my own escapism a lot.

Looking at nature's processes helps me cope with existential questions

What we are longing for is mostly in the past and we should look towards the future. Looking at nature's processes helps me cope with existential questions I have for myself. Looking at biological processes hints that we are not moving towards a merely technological version of civilization, but we need the biological aspect to be integrated, that this is the evolutionary progress we need to embrace. 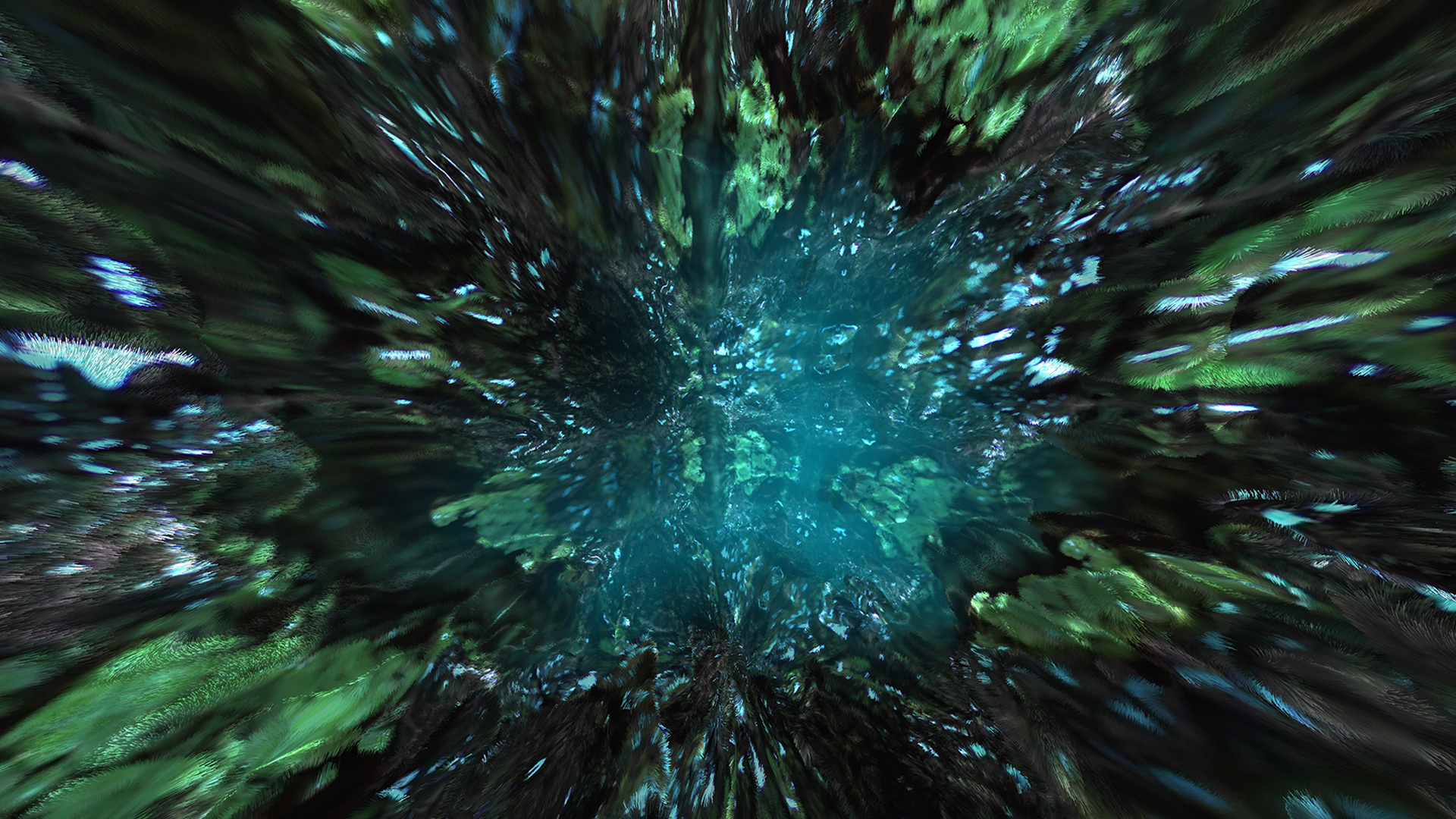 What is your motivation working between technology and nature?

A few years ago I took part in a residency at the Faculty of Geosciences of Utrecht University, where we conducted experiments with the scanning electron microscope (SEM). It revealed complex geometrical and mathematical structures in biological material that amazed me. Seeing this was mesmerizing, it was as if I was seeing the secret code of nature right in front of me. It revealed a certain organisation of organisms to me – with symmetry and asymmetry perfectly aligned; although biological it felt engineered.

The astonishing complexity of our ecosystems is something we need to explore on a deeper level. But there’s some sort of a language barrier. In understanding the natural world, language could be a crippling tool; we miss the vocabulary to explain something not explained before or do things we don’t yet know the words for. It has to do with the perception and anticipation of something recognizable. One could say that language influences our thought processes, and there is a way to get around that by expressing phenomena in visual means. I believe it leaves a larger area open for interpretation and perhaps even intuition. To live in a future where nature and technology are seamlessly harmonized, we need a common language and to be able to understand each other. In time I believe we should be able to achieve such a symbiosis. 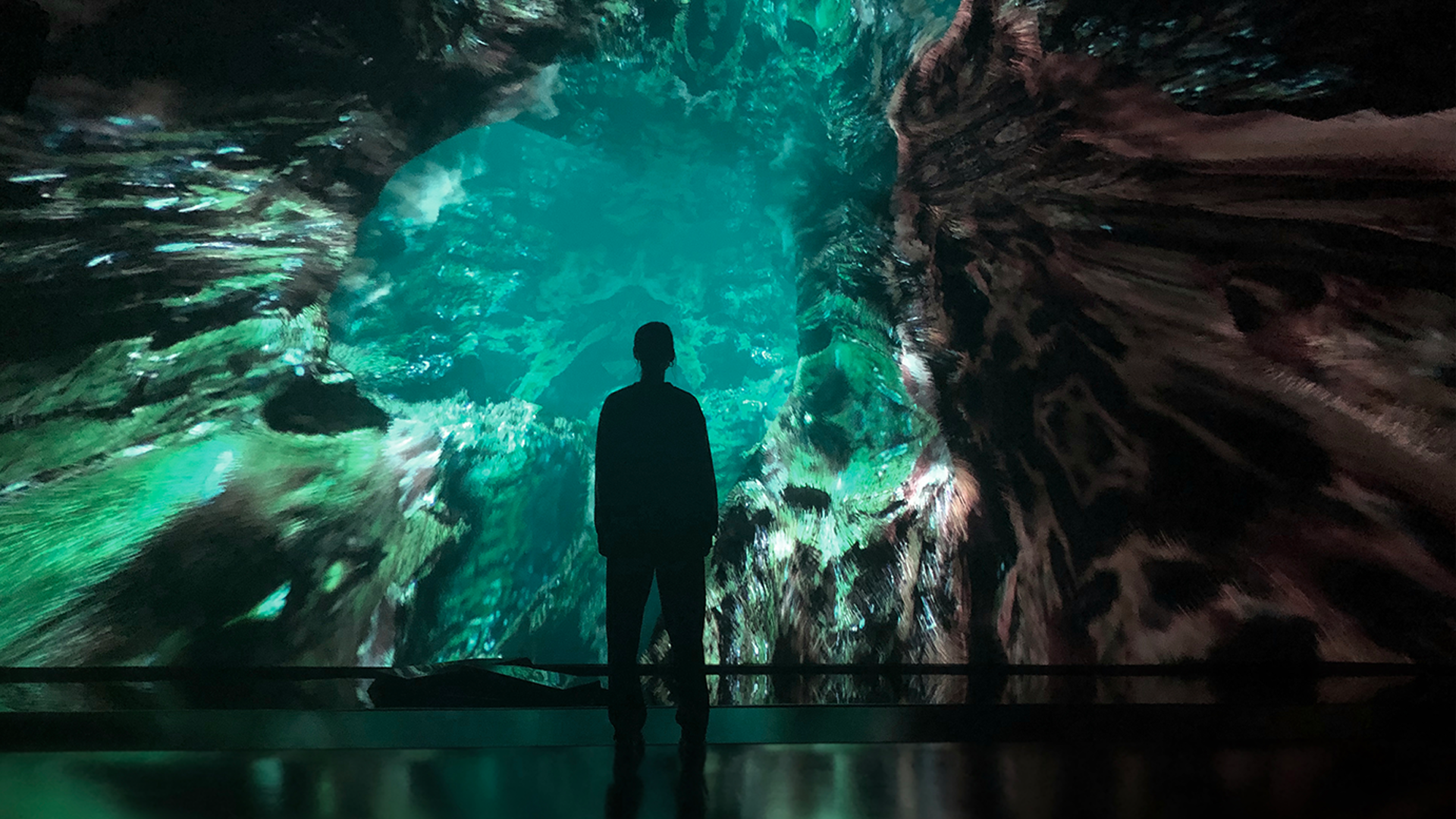 Tell us about HABITAT.

HABITAT is a data-driven installation, first presented and currenly on view at Nxt Museum. It documents and visualizes natural growth based on 3D scans from the natural history archives of Leiden’s Naturalis. HABITAT is a collaboration with NAIVI, who developed the custom-built software for the installation, and sonic designer Stijn van Beek. It aims to illustrate the complexity exchange between humanity and their natural environment, and raises questions on how we contemplate ideas of nature trying to give an alternate vision. The work started out with archival research, to collect data from the Naturalis Biodiversity Center, paired with cinematographic documentation of places around the world. When collecting the specimens for the work things became very tactile but when we digitised it, the outcome evolved into something completely abstract. What is presented is not ment as a realistic depiction of nature but is recognisable as something that feels like it, shown as a very complex landscape where you eventually can get lost.

HABITAT has a circular experience of time; there's no beginning and no end; no up or down; it breaks free from perspective.

I wanted to create an experience that came close to authentic depiction of nature, to shape this enchanting feeling of being close to something wild and alive. The work has a circular experience of time; there's no beginning and no end; no up or down; it breaks free from perspective. The way nature is constructed in HABITAT is almost like a moving canvas, an ever-evolving one.

The arrival of new media techniques can produce nature as a perceived image. I was interested in how imagination functions based on these digital impulses. Does it evoke the same interactions, as if we were perceiving a ‘real’ environment? In the end it illustrates that nature doesn’t exist to fulfil any imaginative purpose. It is not ours. HABITAT shows this paradox, it abolishes human agency. 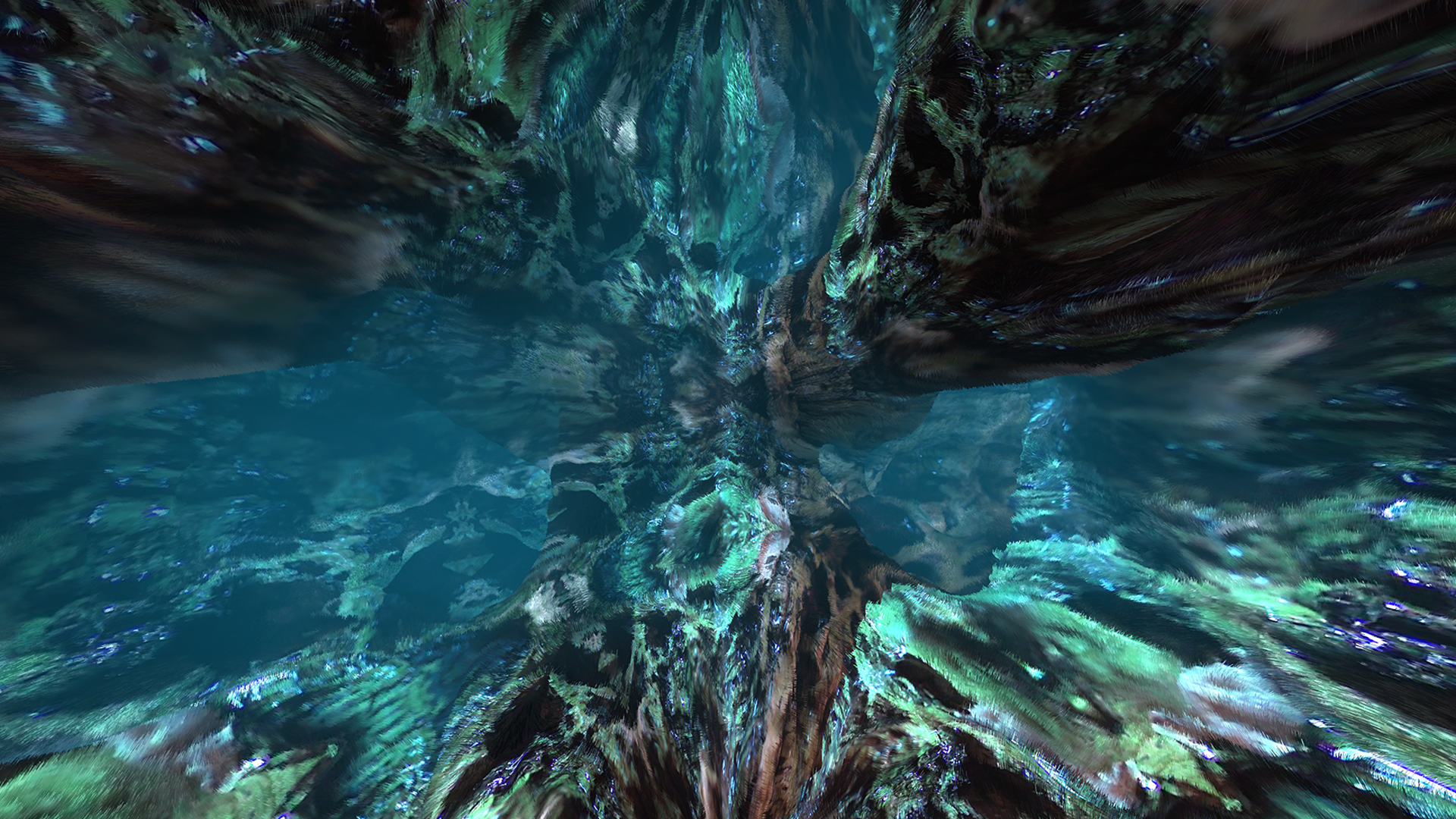 HABITAT spans a large scope of media. What do the mediators of graphics, sculpture, sensors, and soundscapes reveal about our relationship and our communication with nature?

In my artistic practice I aim to reveal that characteristic of nature that we can’t fully explain. How could one capture a sincere experience of something that is beyond our imagination?  Through the means of a wide scale of media I am reflecting on what is available to us to explain things, but also to show how little we know. Because of the information area, I really enjoy exploring this on a deeper level. Is more information providing us better answers or are we left with more questions?

For instance, the implementation of our proximity and rangefinder sensors in HABITAT had more of a sociological purpose. Data driven installations often offer too much control to the spectator. In HABITAT I wanted to step away from this. The work does not immediately react to the spectator’s actions, instead it reacts through delays resulting in an action from one spectator that could create a different visual outcome for the next. Or sometimes the parameters are changed in such a way that you could doubt if it is embedded in the work or a result of your action. This interaction within HABITAT is symbolic for how humanity interacts with nature. It emphasises how humanity is not in control of nature and the fact that our impact on nature is not always immediately noticeable.

It was an interesting journey, we had a lot of discussions about it in the NXT Museum with the curators and the visitors because when you implement interaction in an installation people anticipate an instant reward. When people have the power to interact with a work this becomes the first thing they want to achieve.  The focus to experience the work disappears, engaging with the work becomes an act. When observing the audience I noticed that this is the first reaction but that people eventually give themselves over to the spectacle without wanting to control it. I really like this almost autonomous way the work behaves. 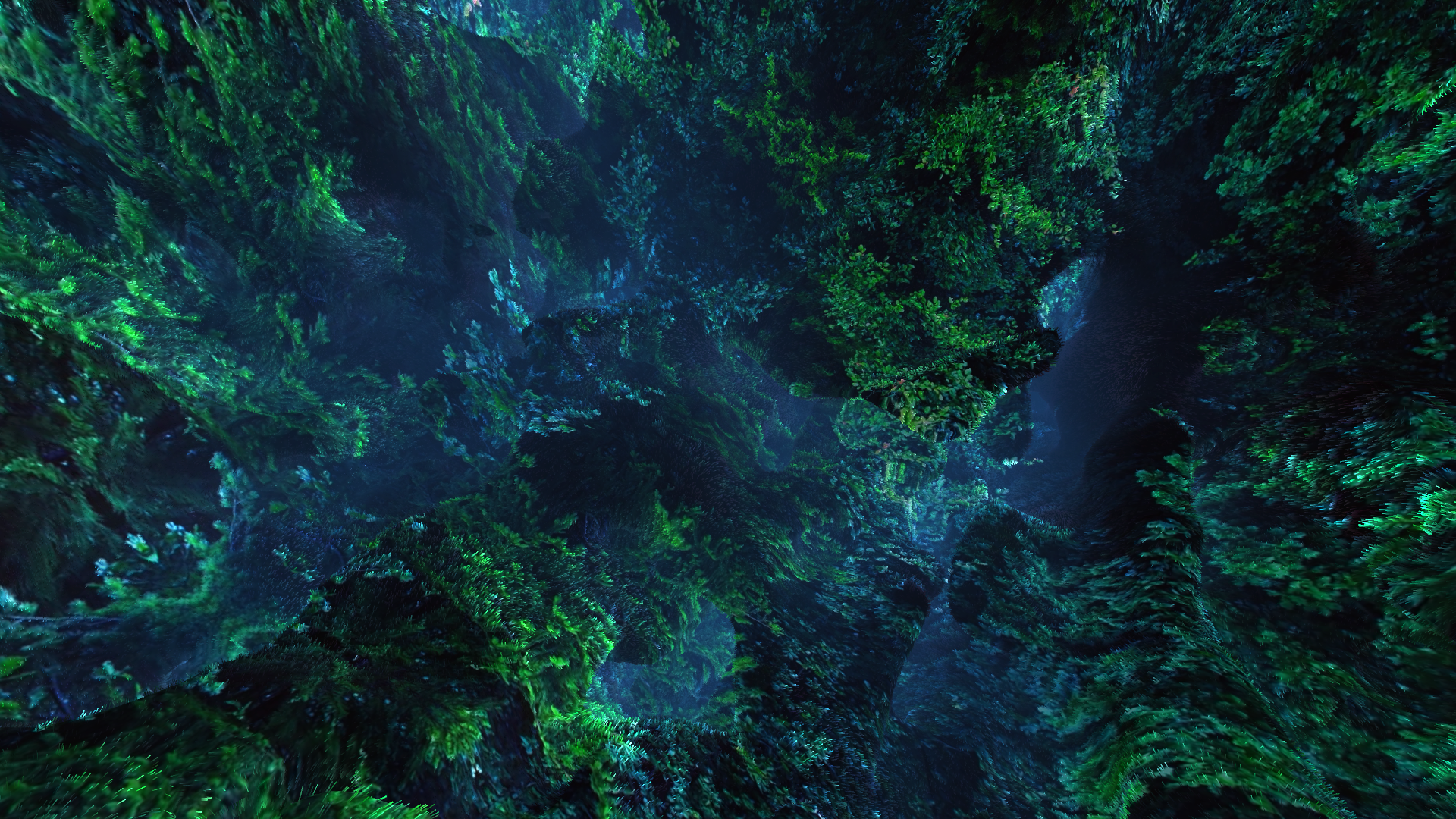 My work is deeply influenced by the complexity of the assumed separation between humanity and the natural environment. In my work I try to explore the different layers of our aesthetic perception of the natural world and how we relate to this “other" world. Raising questions on how we generate ideas of nature and question the several assumptions. Researching this space between humanity, the natural environment and future possible interactions between these entities is what interests me — uncertainty is a dominating and always exhilarating element. I am greatly interested in prevailing ideas that ecology is not to favour humanity exclusively.

That it is not something to gaze upon because we are not superior beings. What we now know about the impact of humans on the planet led to a need of rethinking concepts of nature and ecology. The present day reality draws borders between the various species and in our thought processes  and separates us from our actual natural world.  Also the idea that people are actually traumatised, struggling ‘holding up a world’  that is dissolving. That people are in a constant state of mourning because they have broken their ties with non-human beings, which is a thought that excites me. 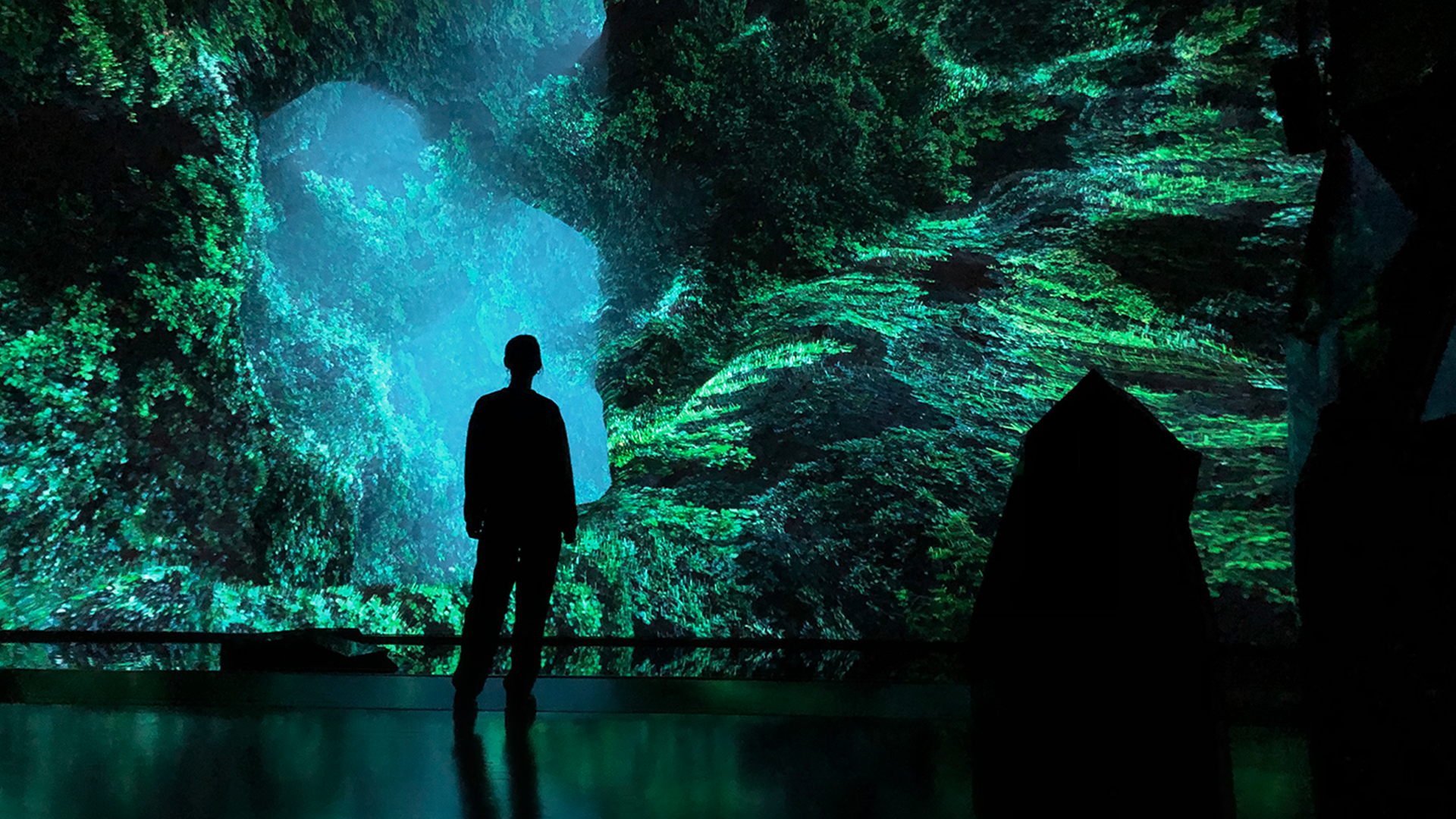 What role does the human play in your work?

Humanity has always been more of a spectator in my work, a distance is created to be able to reflect on the aspects of the spectacle of nature. Amplifying that nature just is, it has no other role than to just be. We as humans set ourselves apart and created a romantic longing to romanticise the idea of nature. Think this is interesting. For me nature is a philosophical concept. But slowly I am investigating our role, not just as a spectator but as a participant. I think HABITAT is my first work that shows this and I am eager to explore more.

Amplifying that nature just is, it has no other role other than to just be 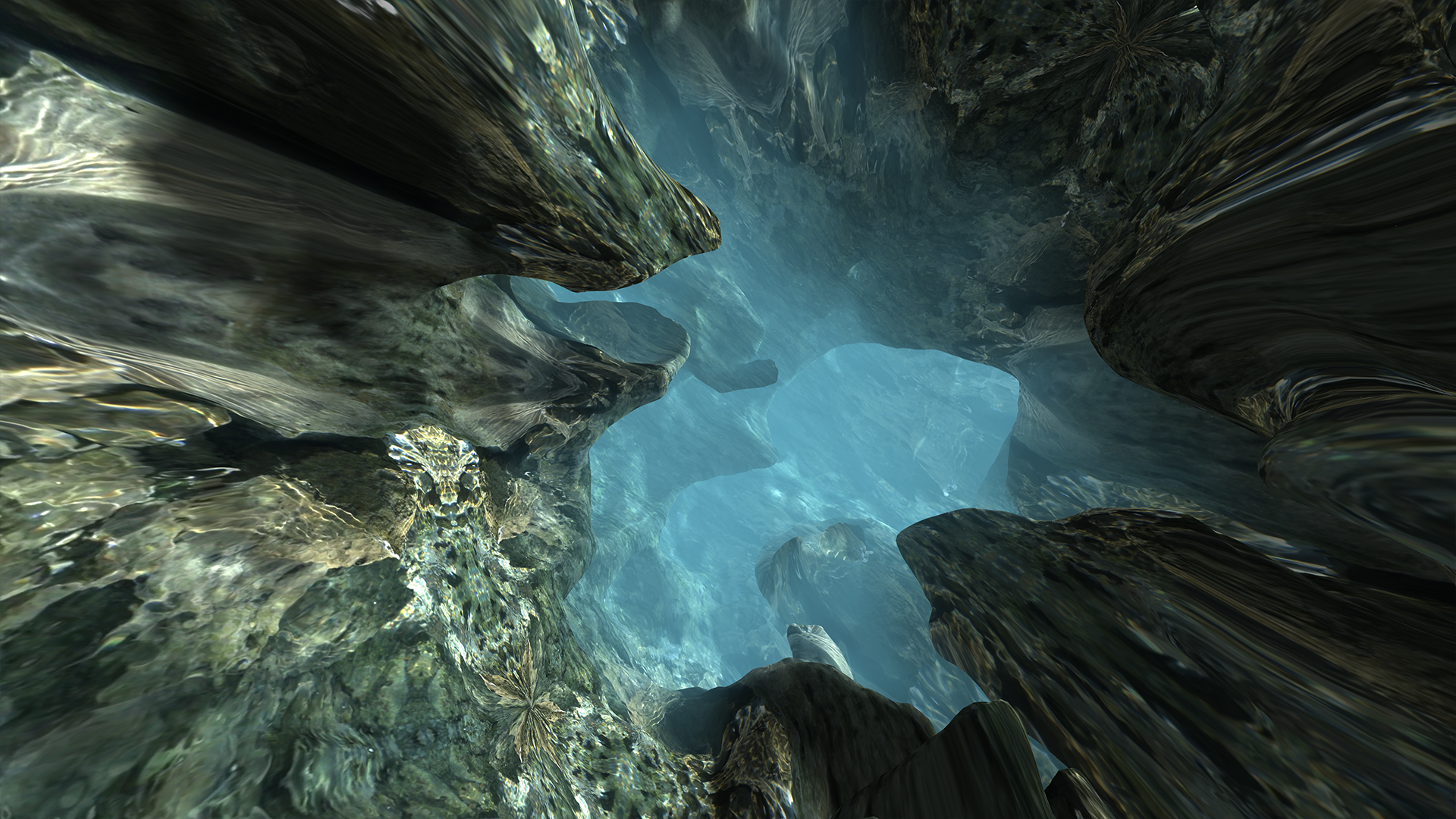 Although it’s seductive to think of human beings as the dominant species on earth, many others play important roles too. Bacteria, insects, algae colonies, and the technological systems with which we are co-evolving all have a dynamism and an agenda of their own, separate from the human perspective. What does HABITAT reveal/contribute to this narrative?

Ultimately an aspired goal is to develop HABITAT towards a dynamic self-regulating system, a ‘living’ creature that continues to evolve in its own way and communicate with other HABITATS. I wonder what it will choose to do. We did some research in earlier stages but found out that this could result in a dormant installation, just because it chose not to reveal itself. So the work would almost not exist for the spectator, an interesting point of view from a conceptual and even philosophical side but maybe not ideal in the form we chose to show it in the museum. On a more poetic level, I feel when I enter the space that the work is alive.

Even when there are no spectators present, the work is still there and moving like a living organism

Even the sculptures, standing like a solid rock formation, almost have a personality. That even when there are no spectators present the work is still there and moving like a living organism, there is no need for a spectator, it just is, doing what it is supposed to do. Although I've trapped it in the digital form, in that space, like animals in a zoo. I think that is beautiful and a little sad. 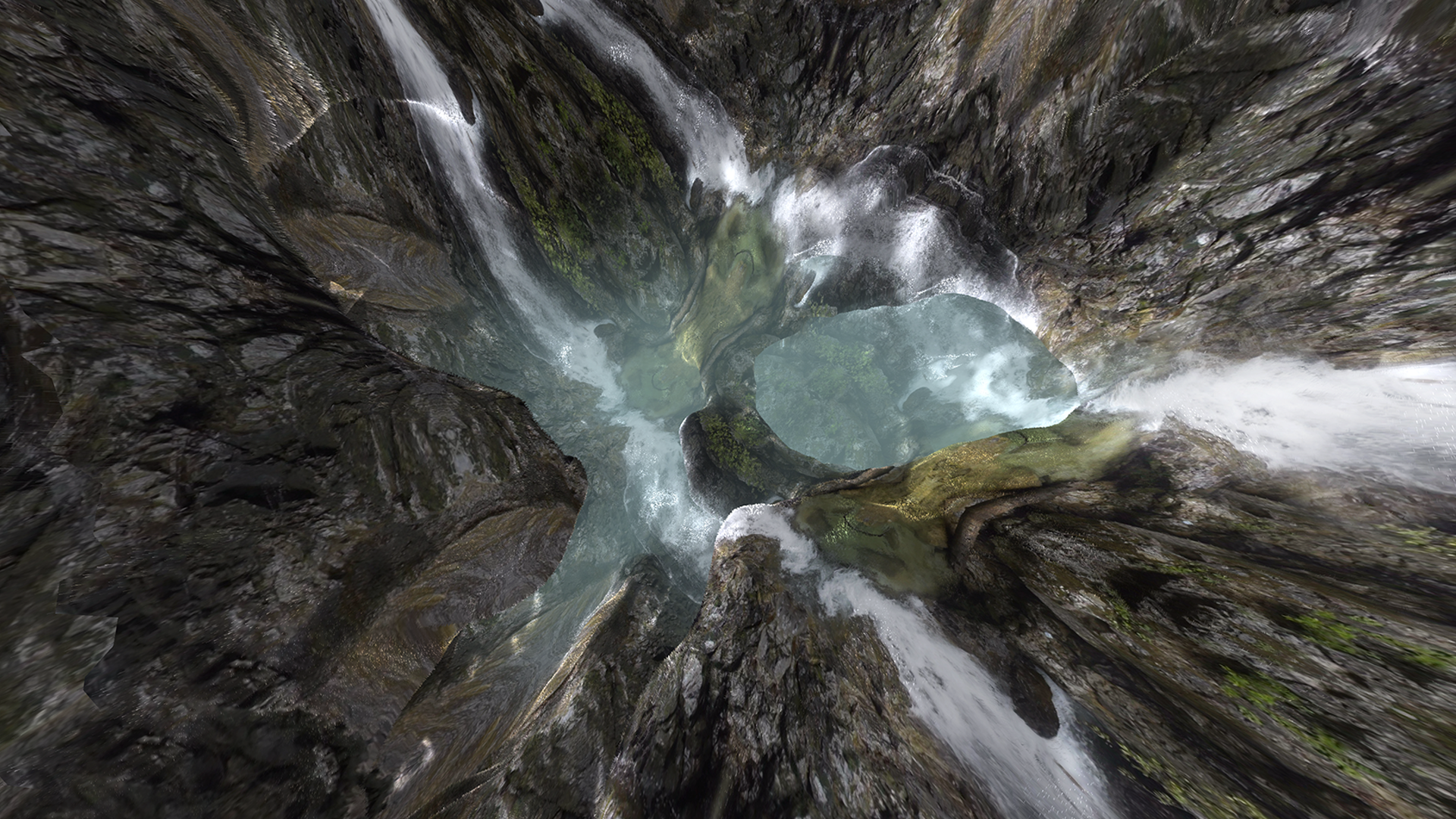 Are you hopeful towards the future?

I find myself increasingly more positive about the future but always keep appreciating the darker forecasts of its existence. What Lovelock explains very well is that we have to see ourselves as part of the future of this planet because it needs us to preserve and maintain it’s working system. We need to move forward as a species and integrate technology in our civilization at such a deep level, in order to save the earth from collapsing. This is a logical part of evolution, it is the next chapter.

About the images: HABITAT (2020) is a data-driven installation by Heleen Blanken in collaboration with developer Naivi, and sonic designer Stijn van Beek. HABITAT is currently on view at NXT Museum (Amsterdam, NL). Unfortunately due to the current measures the museum is closed. Make sure to sign up for their newsletter, it’s worth your while. Promise.